The saying, “I’m not as good as I once was, but I’m as good once as I ever was” was all but true for the Provo High faithful last Friday night as they witnessed varsity games for the girls’ and boys’ teams.  Both boys’ and girls’ teams played exceptionally and honored the tradition and history that accompanies the old gym.  The student section found their home behind the east hoop and created enormous amounts of energy for the home team.

The girls came out victorious over region opponent, Wasatch.  The girls had to overcome a 10+ point deficit in the fourth quarter.  They accomplished this by applying a full court press that created turnovers and scoring opportunities for the Lady Bulldogs.  The girls hit their free throws at the end of the game to finish off one of the top teams in the region.

The boys faced the Cavemen of American Fork.  Relative to the Cavemen, the Bulldogs were small in stature, but they played with heart, grit and hustle.  What many were expecting to be a blow out by the Cavemen turned out to be one of the most exciting and energetic games of the year for either team.  The boys kept the game close with valiant efforts.  They used up ever last bit of magic in the old gym, but fell just short of the upset when a few shots would not fall at the very end of the game.

Seeing the student section behind the east hoop reminded many old timers of the “Green Beret” cheering section that occupied the same spot decades ago.  The currents students did their best to distract and hassle both visiting teams.

Many former players and coaches showed up to support the Bulldogs and to take in the sights and smells one last time.  Decades of history were revisited as the current Provo High community remembered and honored the great events that occurred in the old gym while created one last memory of their own. 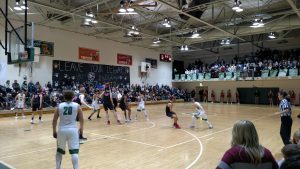 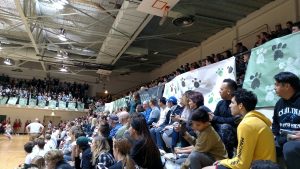 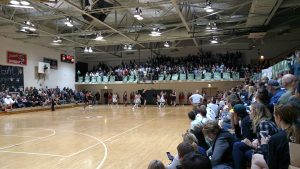 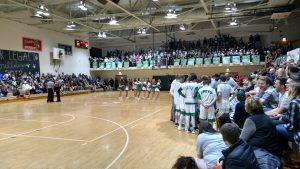