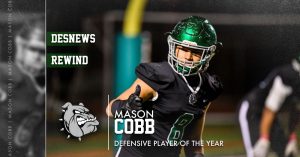 Deseret News Rewind announced their 5A offensive and defensive players of the year today.  Provo’s Mason Cobb was named the 5A Defensive Player of the Year for the state of Utah.  Mason had 118 tackles on the year with three interceptions.  Mason was also named first team all-state by Deseret News.  He will be playing for the Oklahoma State Cowboys next season.  Congratulations to Mason!  It’s a great day to be a Bulldog!