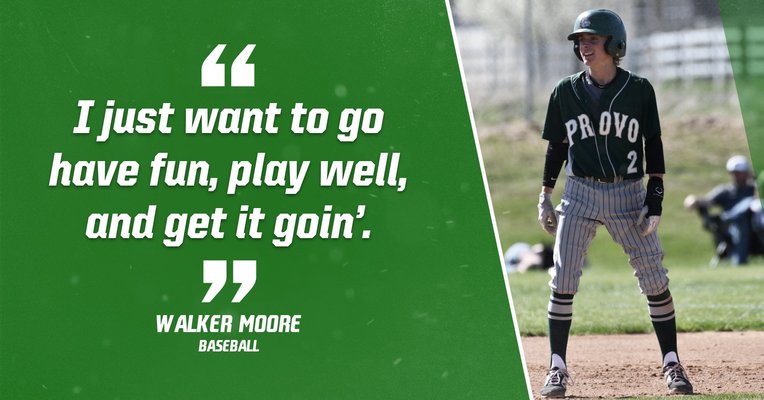 I recently had the opportunity to meet with Senior Walker Moore of Provo’s Baseball team. This is what he had to say…

When did you get into baseball and what made you want to play?

“I’ve been playing since I was like 3 or 4… and [there] was just something about baseball, I played all the sports when I was little football, basketball, everything and baseball really [just] stuck. My whole family played baseball, it was what my dad played in college and I got on a couple of pretty good teams when I was little and… it ended up making me a lot more interested in [baseball] because I played it a lot and then fell in love with it when I was 7 or 8 probably. Then [I] decided it was what I wanted to do with my life when I was like 10, 11, 12[ish].”

How do you feel about this new season?

“It’s a really exciting season, we have more older guys than we’ve ever had. We have 11 juniors, 11 seniors, we have a lot of returning starters, and [the] first game of the season just happened… I couldn’t be more excited for what’s to come this season.“

What are some of your goals for this season?

“I have a lot of really lofty goals that I try to keep to myself… [that] help motivate me and just [help] make sure I’m coming every single day to get better. But as a team we want to win region, we want to make it to [and] win the state championship. Those are our goals, we set our goals high for a reason and we’re going to try and go get ’em.”

What do you do to prepare yourself for a game?

“I used to be really bad at this too, because I don’t like stretching, but as I get older I can’t just run into a game anymore, you gotta stretch. I like getting warmed up and visualizing… and seeing yourself succeed and [just getting] yourself prepared… it’s gonna [make it] a lot easier in the game. That’s how I usually get ready.”

What have you enjoyed the most in playing for Provo and having your dad as coach?

“A lot of people ask me how it is having my dad as a coach and a teacher and I obviously think he’s a really good coach… obviously here at Provo he doesn’t have [a lot of] kids come and tryout [compared to] most teams in the state but… he makes the playoffs pretty much every year [that] he has ever coached, [and] wins a whole lot of games. The baseball team, out of [all the teams] I’ve ever played for [Provo is] just a whole bunch of down to earth kids that like being around each other. I’ve played for teams [where] we were good and we had a lot of really good athletes but it just wasn’t fun because nobody really wanted to be there together, it wasn’t a big deal for everyone. Playing for Provo you come to the field everyday knowing you have a bunch of buddies that want to be there with you and it’s a good time.”

How does it feel being a senior this year?

“I couldn’t be more excited to play my senior year. I’ve been looking forward to it since my freshman year obviously and it feels like it came in a blink of an eye… you hear [this] from every senior, “Hey take every bit you get, and don’t take it for granted.” It’s true man, it’s senior year it’s all going to be over soon so we gotta… go have fun while we’re here. [I’m] excited to get on to the next level too, but [I’m] more worried about what’s going on right here in Provo.”

How do you feel about playing for college?

“I’m really excited to play college baseball, it’s always been a goal of mine to go play college baseball. Next year I’ll get to go live that goal, that dream. It’s just another couple of years to get to prove yourself and play the game that has made you who you are… and hopefully we’ll see what happens after that. I just want to go have fun, play well, [and] get it goin’. It’s exciting to think about.