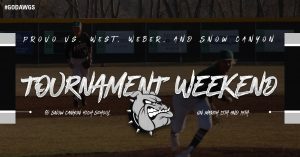 This weekend Provo Baseball heads down to St. George to play pretty tough competition but they know that they can win it all. Their first 4 games started on a very high note with scoring 44 runs with 40 hits and a .392 batting average. Provo’s Pitching staff has been outstanding through the first 4 games with allowing only 1 run that wasn’t earned and they have a 0.00 ERA to start off the season. They’ve only allowed 6 hits and only walked 4 people. Between the 4 starters Walker Moore, Bryan Rojas,  Cole Mason, and Cole Frazier they stuck out 44 people. This weekend Provo plays West, Weber and Snow Canyon this weekend and will play another team this weekend after they’ve played the other 3 games.