Editors Note:  Unfortunately, spring sports for so many of our athletes have been stopped due to the coronavirus outbreak.  Here at provobulldogathletics.com (soon to be provobulldogs.com), we would still like to highlight some of our amazing student-athletes.  PHS’s Sports and Entertainment Marketing students will be bringing you highlights and reports until we get back to school and back to normal life.  Thanks for checking in on Provo High School’s source for all things extracurricular. 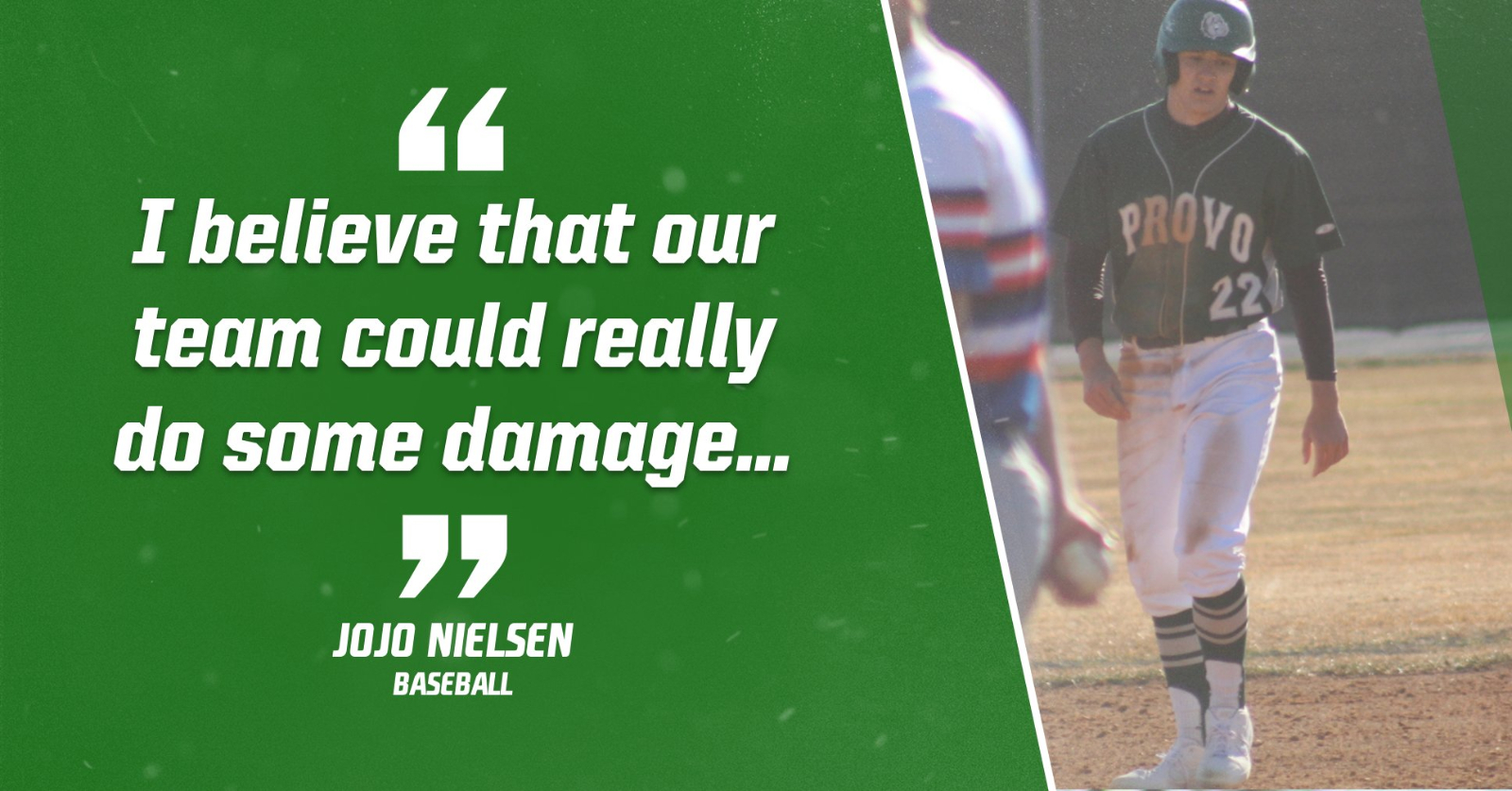 I recently had the opportunity to have an over the phone interview with senior Jojo Nielsen of Provo High’s Baseball team, this is what he had to say…

When did you get into baseball and what made you want to play?

“I think my first year of baseball would be tee ball and I was like 5 or 6 when I first played. It was just because my parents thought I had a good arm when I was a little kid, so they wanted me to play. Growing up I [actually] played with Mike, Feliks, Jake, and all those guys.”

What’s your favorite position(s) to play?

“If I could choose I would love to play catcher, but lately in the past few years outfield has been my go to choice…[the coaches] would rather use [me] in the outfield than behind the plate.”

What were you looking forward to the most this year?

“I believe that our team could really do some damage in St. George tournament and possibly even go to state this year. [The St. George tournament was] pretty rough, the hardest part was we were getting ready to go the next day and they took it from us the day before we were supposed to leave. I showed up to practice ready, first person there and [was the] first person to hear the news, “No Practice.” I was like what?!”

How do you feel about the Corona-Virus outbreak happening right now?

“I think that in the beginning people weren’t thinking about it as much as they should have, [and had] some people [that] were definitely way over reacting at first. It was something we needed to be aware of but not something we needed to freak out about. If people would have just followed the rules we wouldn’t be where we are right now, like the whole social distancing thing, a whole bunch of people didn’t even listen to it and now look. It’s becoming way out of hand and it’s hurting the class of 2020 all over the world. Like people don’t realize this is like the biggest part of our lives and twelve years of schooling lead up to this year and now we don’t even get it.”

Do you think there’s a chance that spring sports will start up again?

“I really believe so, I really think that if the district or whatever actually looked into it closer toward when gyms and all that are going to start opening up I am a hundred and ten percent sure that any student athlete that you ask will be willing to play in the gym. We’re willing to have a later season if it means we get our senior season, like not to mention the amount of seniors we have on the baseball team this year. This was like the year for Provo…”

What have you enjoyed the most playing for Provo?

“Just the fact that through the years we were the underdogs… from my freshman year to my senior year, for football any ways. Everybody always dogged on Provo, like they wanted to play us because they thought they could beat us. Our senior year that completely flipped, nobody wanted to play us because we were just a team that was rough, we weren’t sentimental toward the other team… [We were] scrappy, we hit hard, not even that we get huge hits, we just hit hard in general. And then baseball freshman year we weren’t like [the greatest] but we weren’t like terrible either. And I don’t really know whether or not teams wanted to play us back then [either], but when [Coach Moore introduced] the scrappy doo shirts and talked about how scrappiness is the key for us. It just made it seem like we got much more confidence to where we were able to play harder, play faster, play stronger than the other team and we’d usually come back on top.”